Red Bulls Around the World

What's this? A potential worldwide list of Red Bull flavors? 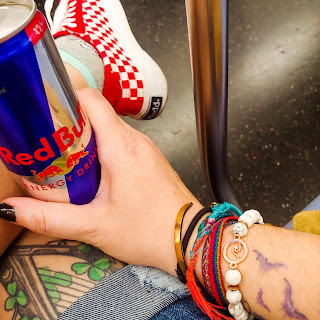 I remember my first taste of Red Bull. I was a Surge and Mountain Dew kid and didn't fuss much with energy drinks because of the pure sugar buzz from the pop. So imagine the joy I found in Red Bull after an already long day at the Michigan Renaissance Festival when Bud came over to share with Kitty and myself. Life. Changed. HA! But he shared with us and it became a thing between Kitty and myself for Winterguard practice thereafter. We would swap buying it for practice- not regular one but big deal rehearsals like when we practiced for States or when we had Regionals and Nations and things for WGI. It was a special occasion thing because we weren't bar people. But then later I became a bar person. Still don't do alcohol much at all (like twice a year in a bar) but I do get Red Bulls instead. Even on my 21st birthday I got a Jager Bomb and hated it and exchanged it for the rest of the Red Bull in the can. Don't tell my brother. Contrary to popular belief- less sugar and better for your organs than a cocktail plus half the price usually). It started as a thing between best buds to amp ourselves up and now it's a safety net, a placebo effective stress reducer. Something that brings me back down to Earth when I'm free falling in thought, in stress, sadness, or to celebrate. It's basically my cure all.

Since my KitKat bucket list has brought me so many friends, some actual friends that I talk to almost daily, I decided to move to Red Bull as well. I figured why not add another worldwide set to my bucket lists since it appears as if we're headed for another, at least mini, lockdown so I need something fun and slightly time consuming (aside from tv and play writing) to occupy my time since my job will likely close again (it's a theatre connected to a day care and a school so if those close, it ALL closes).

The Red Bull world is smaller and more difficult to come by than Kats, I think, but it could maybe be done if I'm willing to spend a little more. Which I'm actually not- at least not triple prices and shipping prices.

The exotic snack world is INSANE, you guys. Full on the Faygo pop I can get here at home for $1 some website had on SALE for $15 marked down from $30! For ONE bottle! And they're just from Denver or something so imagine how stupid some of the international prices will be. Almost cheaper to just pay a friend to mail it than buying from a dropship style website. Just a thought.

I've asked the Red Bull Reddit community to help with building the list. Not sure yet if I'll to an Insta account for it- I kind of want to just for something to do and something to tie it all together BUT it's all kind of stupid. Like, all of this is kind of stupid. A lot of the flavors are the same worldwide- from what I have seen so far only a few countries have a few limited edition or country exclusive flavors. So you'd think that'd make it easier but it doesn't. KitKats are a large community. Large. And people are willing to mail out one tiny bar to help a pal cross it off of their bucket list. But a whole can of Bull is heavier and more expensive to ship. Anyhow, since most are the same worldwide like of course OG and SF and such- I'll just keep them as American flavors since that's where I had them. Now I'm also wondering if I should include off brands like Holland's Basic Energy since it's a cheap version of Bulls but the color, can and effect are the same.