Amsterdam is for Lovers- The Sexmuseum Amsterdam

on December 05, 2017
Amsterdam. A city widely known for its Red Light district, Van Gogh, loosey goosey morals about peep shows, Febo machines, cafe marijuana and, of course, waterways. Which one of those is least sexy to you?
To me, the pot. But I loved the sex of the city. In America everything is taboo, hushed and scandalous. Not in Amsterdam. Amsterdam's sex scene is welcome, healthy and can be downright fun. 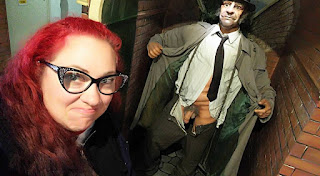 This guy!
The Sexmuseum Amsterdam, or the Venus Temple, is one of the most visited museums here for a reason. Having met up with my Dutch friends for the first time on their side of the Atlantic, we went to Amsterdam and somehow found the Sexmuseum to be our very first stop into the city. We went in with a wink and a smile, and at only 5 Euros a person, we unleashed our slightly more rebellious sides. 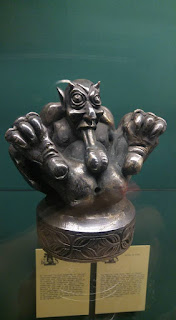 Actual Display! Woah.
The museum itself was a series of floors and rooms with winding staircases and centuries of sexual artifacts on display. We were greeted by a flasher statue in a trench coat and fedora looking like Humphrey Bogart with his hard-on out for all to see! It started with a tour through the ages of Greek statues, Roman statues, some pottery, stories, art and photographs of sex through the ages. Really god damn fascinating.
Throughout the mazes I was emphatically interested in some of the strange devices that at the time would seem like a dream come true for a lady in heat, if you know what I'm saying, but now would just seem crude and desperate. Dildos made out of hardened clay, or jeweled metals. There was a display of chastity belts that I found particularly alluring. I don't quite understand how people can hate the women in their lives that deeply as to make them wear something like that! I went in with my husband, my friend and her husband, and though all four of us giggled over a few of the sillier looking monuments and statues, I could see that with some of them my husband was slowly checking out. He's a little more bashful, and I daresay some of the exhibits got me feeling a little bashful as well but not as much as I was feeling hot and bothered! I'm not ashamed to admit that an entire floor of sexually explicit photography turns me on. And it made me think about oral sex a lot. First, in that it should exist more in all our lives, but mostly about how truly historic the act is. There were probably a thousand photographs, carvings and other various types of art promoting cunnilingus- which, you know, thank Eve or whomever. You know that people have sex because we all came from somewhere over vast amounts of time and evolution and blah blah blah. It's never a question about whether or not people have sex throughout the ages. A lot of this Museum is built to showcase how people have sex, not just why. It depicts oral sex on bowls, carved into Japanese Noh masks, carved as the handle of a frickin' spoon to feed your kids with. Any and everything possible.
Every room held a specific era or engagement. It's designed to start historically and intriguing but busts right on into risque and right out there in the open sex acts. It boasts about orgasms, creates peep shows out of Hollywood's elite and shakes and shimmies for floors and floors! But then on the other side of that candle, the museum helps recreate all of those hormonal reasons of the why and a few hows that make you want to go into a dark corner and have sex (we didn't, nor did we stumble upon it). It even has a display about that! 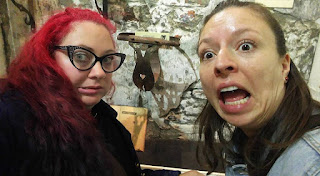 Chastity Belts. Cool, guys.
I knew this Museum existed before we went to the Netherlands. It was on our definite list of things to *ahem* do while we were in Amsterdam. At least on mine. Everybody says to go to the artists museums but I'm really proud that this was our first stop because I felt like we started in a good place together- as Dutch natives who frequent the city, my pals had never stopped at the Sexmuseum! We all had some fun, got lost a little bit and felt a touch scandalized in my favorite way. I definitely recommend stopping by Amsterdam's Sexmuseum if you find yourself in the area. Or if you're not, make time! It's enlightening as well as educational.
This museum may get you hot and bothered, make you feel a bit cheeky or may even make you feel sad and disgusted (if that's you, probably don't go). It's worth the price of admission and then some because it makes your inner thoughts about sex somehow feel less creepy or scandalous. It serves as the perfect platform to giggle about boobs in your face or on your camera without feeling like you're judging anyone or getting escorted out of the Red Light District by the Police for taking photos of the window girls. It's a safe environment that doesn't even bombard you with a gift shop at the exit.
Can you imagine what you'd find there if it did, though? Oi!
For more information click here: www.SexmuseumAmsterdam.nl