This week is about finding travels deals online through Spirit in a sort of pro/con list. I am not affiliated with Spirit Airlines in any way.

I'm a really thrifty shopper- I look for deals, I research competitive pricing, I look for the gold in all shopping situations (but not in a Hoarders/TLC show way). I like Spirit because if you're not too consumed with time spent at the airport it's a really great deal. Where else can you fly round trip to NYC non-stop for about $150? No place. That's where. 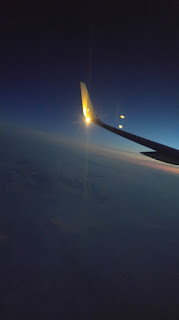 Everyone takes these photos, right?

The Good: I'm not always convinced of Spirit being the best choice for all flights, but, sometimes a good deal is a good deal- or a great one! I found a one-way ticket to DC for $48 two weeks ago to visit a pal and I am kicking myself for not booking for a later date!- even though the trip back was more expensive at about $110... it was a 2 hour non-stop flight! WHAT was I thinking? Meanwhile American was around $325. See below for a more recent cost comparison.  If you're in it just for the fun of going someplace on the cheap and not SUPER worried about time restraints on your itinerary, I'd say at least check it out.  I find myself weekly now looking up prices of flights to random places I'd like to visit. Seriously, I've really fallen down the Spirit rabbit hole. 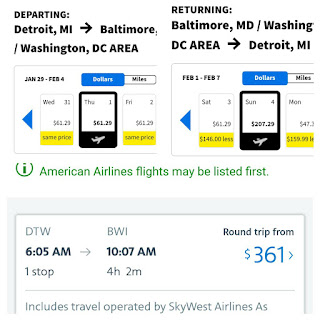 This is the cost if I left this week to DC from Detroit, round trip at about $250 per person. I did the same trip with American Airlines and you can see it's $100 more AND has a lengthy layover for no apparent reason. Hard to pass up.

OK: I've recently taken to Spirit's Free Spirit rewards program for frequent flyers. If I use Spirit any time soon it will be worth it. Anyhow, with this, of course, you earn sky miles for every flight, which, as you know, can be cashed in on the website for free airfare once you reach a high enough bracket of I believe 5,000 miles to equal one RT flight. But because I am a Free Spiriter I was also emailed about this annoyingly on-key survey program from Spirit called Miles For Thoughts. Instead of regular surveys all of the work from home and Penny Hoarder sites tell you about that can earn you a whopping 13 cents if you're lucky- Miles for Thoughts asks the same annoyingly invasive qualifying questions and "getting to know you" stuff  time after time and you're lucky to get a survey at all sometimes- but when you DO you get miles! I landed my first survey, and despite my binge watching Gilmore Girls for the millionth time, I earned 400 miles in what I imagine would have been six minutes if I were actually paying attention. Pretty easy stuff about banking and Merrill Lynch. Also, some of the surveys remember your answers so you mercifully don't have to redo everything every time. So, if you'd rather earn sky miles like me instead of spending all night trying to earn pennies at a time, I'd look into Miles for Thoughts. You DO, however, need to be on Free Spirit in order to get into Miles for Thoughts- those two accounts merge together into one MEGA spirit account. Thrifty tip: They're both FREE!
I've also been thinking about their Spirit World Mastercard credit card through Bank of America. Not that I need another card, but my credit is GOOD and you earn 15,000 miles from it (which is up to three RT flights not including taxes and fees blah blah) when you book your first ticket plus double cash back if you use it to book flights otherwise through spirit. Maybe I'm a sucker for thinking that's a good idea, but you can always cancel a credit card, or leave it open but rarely used to help your credit score a tad. I'm still on the fence since opening this post on Friday. The restrictions for those miles are heavy, but unlike other credit cards, it doesn't say you need to spend this much money in this much time to qualify. It just says from your first purchase, which I can only assume is through Spirit. Still, though...

You can also join their $9 fare club, which is a monthly fee of, you guessed it, $9, but lets you take better advantage of offers such as one way flights for $25 instead of $50+ and half off baggage check-ins. It would be worth it if you used Spirit a few times a year, I think. $9 a month is like, one small Starbucks coffee with no frills and only one sugar (but not the natural raw kind or Splenda- those are fancy extras).

Some tips if you choose to fly Spirit for the first time:

1. There are checked bag fees. You ticket is for you and a personal item only. All other bags are subject to extra fees, which I would recommend purchasing ahead of your flight.  They do check.
2. Spirit does not fly to every American airport. It does take you to some Central and South American airports for a deal, don't expect to go to a luxury vacation spot like Hawaii on Spirit for cheap.
3. You have to pay for everything in flight. Bring a book and a snack.

The Dirty:
The seats are smaller. There's barely any legroom. Don't be tall. Or have expectations of being comfortable if you are tall. (I'm not tall)
Spirit is rumored to be low fares because it's low quality. I get it. I do. It's hit or miss. On my way to San Diego there was no issue flying. Same with Orlando. Everything was on time, everyone was pleasant, my Dr. Pepper exploded a little.
BUT on my way to Puerto Rico the way out was delayed a few minutes. No big deal. Got there fine. The way back, however, felt like as close as you can emotionally get to not knowing where your kids are at night while still being safe and not worried about anyone's death. We got to the airport at 10am for a 12:30 flight. Flight delayed. Flight delayed. Still, more delays. At 3ish or after we found out it's because there was a dent in the plane that they were fixing. What? A dent? So, HOURS later we finally boarded the place- at almost 6pm. So we board and sit in waiting for another half hour because some assholes refuse to make room in the overhead compartment for other paying customers. Dicks. Then we get to Florida and have to fly around a storm. It was completely bad ass and I have lightning videos somewhere around here. It did delay us further but not anyone's fault there. Totally dope. BUT when we finally get to Detroit Metro it's raining. It takes LEGIT 55 minutes to line the plane up with the gate so that we can exit. They. Could. Not. Line. It. Up. THEN they (or whatever powers that be) decided that since it thundered once while we landed an hour ago that it was unsafe conditions to unpack the luggage from the compartments under us and send it to the baggage claims. Only they didn't tell us that as we exited the plane. We had to find out another hour later after we all swore we didn't need our bags anymore. Then about 45 minutes after THAT bags started coming down one at a time. So, long story medium, our trip home took us from landing just after 5:40pm at DTW to finally retrieving our luggage well after 1 or 2am. I was exhausted. I don't know who is fully to blame for everything that happened after our arrival to DTW, but since we were there with Spirit airlines, I guess it's them. I don't know even if that can be helped or what airport policy is there, but after a shite day waiting for our flight and then waiting to get off of our flight, let's just say there was no cherry on top. Best bet is to travel lightly. This was a BAD experience, but probably not common.

So not every trip is the same, like all flights. If you're willing to travel light and have no real concept of time, I recommend these deals. It's quite worth it if you're saving half or more of what you'd spend on American or Frontier or something to get to the exact same place. I like Spirit because I get so excited at the thought of going somewhere more on the cheap than normal, and actually going sooner rather than later while still having pocket money. A lot of time people don't travel when they want to because of money, right? If money is your excuse to not go then you're traveling all wrong. Hopefully I could shed some light on your plans and make your wallet hurt a little less with some of these tips.

I'd love to hear some other stories about flight deals. Next story I will go into my favorite app, Hopper, among a few other travel apps. Stay tuned and be kind to one another!