Anecdote: A long time ago my buddy Josh went to the train station in Ann Arbor and said I want a ticket to your next leaving train and found himself in DC for a few days on a whim. I have ALWAYS wanted to do that and I thought that it would be bitchin' to have it for flights where you just pick a date and hit show me all flights- alas, no, I never heard of anything like that. 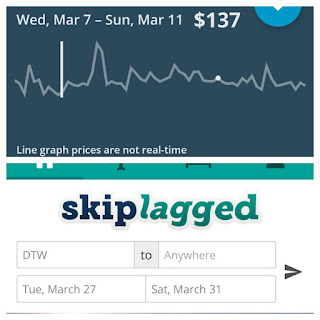 BEHOLD!! I bring you SkipLagged (also available in app form, which I am currently downloading as I type). From the look of things, I played around with a few days from Detroit to ANYWHERE just like Journey sort of said in Don't Stop Believin'- the sickeningly common Detroit "theme song" lately (Detroit runs east and west, South Detroit is Windsor). I'm toying with leaving town over the weekend of March 31st for personal reasons, and I don't care if I go at it alone. It's always really fun to imagine that you're going somewhere on vacation, to dream that you're doing something for yourself that makes trading hours for dollars worth it. So this beauty here let me put in my dates of ideal travel and hit enter and it gives me a list of discounted destinations to choose from. I'm instantly on board with this and will definitely use it to find last minute stops and hotels. How exciting! Even if you're not a big saver when it comes to money, if you're itching to get away even for just a few days, this looks like a good place to start your planning in reverse; plan the trip ideas then pick the destination based on the best deal. It even has a gauge on the app to let you know the highest and lowest price points and when. Helpful if you're actually making plans. 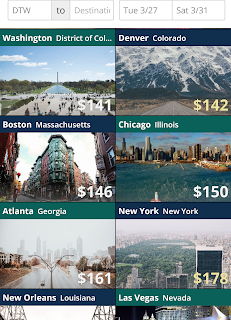 These are ROUND TRIP prices, y'all!

Another deal app that I have been digging on lately is Norwegian Air. A bit of a bummer that they don't fly out of Detroit Metro, but I can Spirit or Skip my way to Chicago or NYC for cheap to catch those flights and STILL save a whole canvas bag's worth of money. Imagine with me, if you will-

Katie's dream for 2018: Achieved!  **see edits at bottom
All details are written in real time as I stumbled into more and more deals and non-deals. A plan formed on accident in my dreamer brain that was too good to pass up- so I didn't. That's livin'!
A few days over in Europe so that I can let me heart go wild in Dublin again and also visit my sister from another mister, Suzanne, just outside of Amsterdam. She has already welcomed me into her home any time I'm visiting, so that saves on hotel costs there in exchange for American treats, which is always a blessing. So basically Dublin is the only room to find, and I have no issue with hostels. I think. Thrifty, right?

First off, get my ass to SWF in NY. Easy enough, blah blah. Not. I digress. 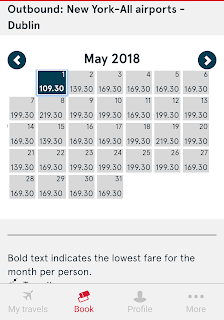 With me so far?

Then after a few Irish days I'll head back to Amsterdam to see one of my very best friends. I can't tell you what she means to me, she's more of a sister. I guess that sums it up pretty well. Well, Norwegian one way to AMS is still over $120 but Hopper is $84 with a note that says the Hopper hasn't seen a price this low in 8 months. Helpful! That's why I love this app. 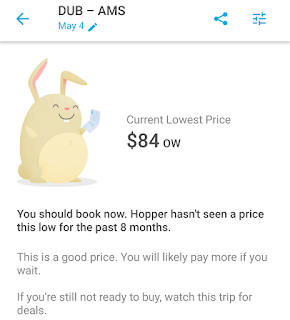 I'm going to keep looking. It sucks that it costs more to travel a few hundred miles to and from home to NY than it does to go a few thousand miles over the ocean.
Another thought is I could fly to and from LaGuardia and just take a train or uber or something to Stewart because It would cost me less to do that than it would to fly to SWF.... Train? Uber? (I can't bring myself to take a cab or Uber due to a Criminal Minds episode a few years back! True story!) So many options there but it seems like getting from Michigan to New York is the harder part than actually going overseas.... Like the MTA which they say is about $10 a ticket but probably takes hours... Plus I can't book my trip to NY before I book my flight out of NY because, obviously, I need to know times. I'd rather go directly where I need to be than risk being late. Pro Tip: Don't be late! 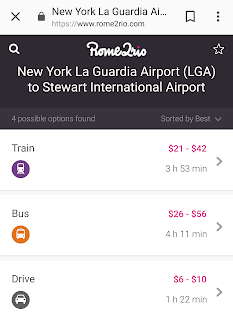 It's a real ball buster that Norwegian flies out of Chicago BUT not to go to Ireland or Holland. I could try SkipLagged to see if there is a flight deal from Newburgh to anywhere with a Detroit layover and just get off there if it's cheaper than these flights. Rats. Maybe if I leave a day early? Or stay an extra day, or both? If only I didn't have that pesky day job to get in the way! These are every thought I pass by when deciding each vacation, each stop or each idea. Seriously.

Anyone have any coupons or tips?

So, this is basically how I research all of my traveling. I. Scour. And I think it's fun, but it can be exhausting. At least through this make believe but possibly actually happening trip the time spent can help me eliminate the apps I don't like, or that are very similar to the ones I do. I have about 15 travel apps downloaded on my phone to try out, so, makin' my way!

But shoot, Amsterdam to Detroit is only $182 on Hopper...No need, I'm rolling my own eyes at myself for not checking Hopper first. (one-way to Dublin is still over $300, though.) 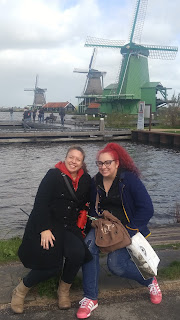 Until next time, be kind to one another and tip your American waitstaff!

Edit: I booked this trip!
Detroit to Boston: $70ish on Hopper? * still looking for a deal flight here because a few say check back.
Boston to Dublin via Norwegian Air: $139* I upgraded
Dublin to Amsterdam via Hopper: $84
Amsterdam to Detroit (with Icelandic layover) $189

All together I am paying a mere $500 for all airfare, staying with friends in Holland, and Insta-spoke to a few travelers about Dublin hostels and found a good one with a women's only floor and storage lockers- so I feel confident about not dying!

I'm so excited, I can almost not believe it's happening! But it is and all on happy accident. If you need some tips for easy travel fares or scouring help let me know! I'm apparently an ace at good timing- which is a main component of thrifty travel!