The Whaley House- Haunted or Nah?

on March 28, 2018
According to Wiki, "The Whaley House is an 1857 Greek Revival style residence, a California Historical Landmark, and museum located in Old Town, San Diego, California. In the 1960s, the Whaley House was designated as an official haunted house by the United States Commerce Department." 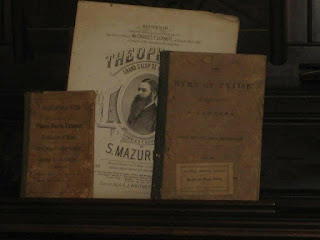 I call malarkey. Or at least a notion that maybe it USED to be haunted, but too much goings on has happened and the spirits left to finally be in peace. I imagine even ghost mothers don't want to hear your screaming and unattended children who leave sticky jam hand print all over their ancient walls when they are rumored to have their own ghost baby to take care of (RIP Thomas). I visited this house for the first time in April of 2004 with my Winterguard team during our trip to Winterguard Internationals ( WGI Hollaaaa) and it was more that we were talking about hauntings and looking for ghosts than actually feeling haunted or alert to our surroundings. In 2005 TIME magazine labeled the Whaley House as the most haunted house in America, even besting the Amityville house, the Whitney Detroit and the Sallie House which have all been proven multiple times. Me thinks TIME was promoting a business and a museum over actual proof. In 2014 I visited Ole Whaley again.

As an avid ghost hunter with an actual documentary short about Historic Fort Wayne Detroit with Metro Paranormal, I can tell you that the gut feelings you have in one place that's, to a sensitive person like me, proven itself to be with spirit like that- the Whaley House feels just like plain old house. 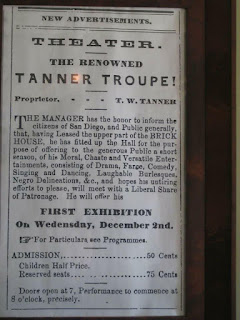 I love all theatres. The older the better!

But this house is DOOOOPE! If you go thinking it's a cool museum with a fun and also horrid graveyard backstory of suicide and shame, it's really cool (and sad). As a historical landmark this house has seen it all. It was home to the Whaley family, of course, the Whaley General Store, a commercial theatre and a courthouse. The family lived there, then didn't, then did, then left, then came back, all lived in it together, preserved it as a museum and stayed a family home until 1953 when the last remaining family member, Corrinne Lillian, died. 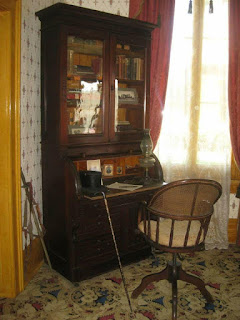 It opens with a pre-room leading into the courthouse. It's small but so interesting. Imagine having a courthouse in your home! So weird. The theatre was really cool, imagine all of the people who came there, too! In your house! As a theatre major, I was into it! However, as much as you'd like to think all old theatre spaces are haunted ala The Phantom- they're not. At least not in the afternoon time. What you think is a moving curtain from on stage is really just an air duct pushing out cool air. That's the only motion you'll be likely to see there. Sorry. Spoiler Alert? My favorite room besides the children's room with creepy dolls and fancy clothes about was the family sitting room. Here you see some of the art collection, the family piano and credenza for what looked to be their correspondence desk. It was difficult to get any good bedroom or kitchen photos due to the plastic walls and the amount of sunlight bouncing, but perhaps a third visit may be in order. It's all really neat to marvel at. The craftsmanship alone! I have shirts that I have owned for a year that have already fallen apart and these clothes are over a century old and still exist! The dolls and toys may not be as functional as they used to be but they're still there! (IS a doll functional??) Time has aged them but not destroyed. Things used to be made better... 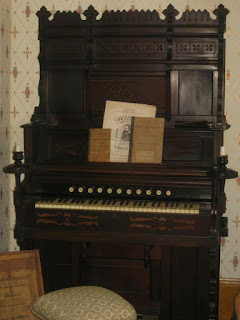 I'm told it can still play.

The photos I did manage to take make it look almost normal, but to me there is almost nothing normal about a dolly that has been sitting on the same bed for 70 years or more with plastic windows surrounding it. However, it was all really cool. It's a glimpse into a different time, a different world. The admission is cheap at just $8 with Military, Child and Senior discounts available. It's also available on the list of locations for the Go! San Diego CityPass card mentioned in my previous post here.

If you're interested, you can check out their Website to plan a trip or just investigate for yourself from afar. It's fun to give yourself the chills, so why not stop here if you're in the San Diego area? It's definitely worth seeing for yourself.

My verdict: Not haunted, just an old tale to get people in. But maybe my two times there were slow haunting days and the spirits just had things to do otherwise. Maybe they're like Hogwarts portraits, dipping into various spots around the grounds. Either way, it's a fun visit.
If you say you're scared of ghosts and haunted houses then this is your perfect destination. If haunted at all I will say it's lightly ghosted, so you can still say you were in a haunted house but you are HIGHLY unlikely going to catch any cold spots or see any figures.

Do you believe in ghosts? Have you toured the Whaley House and have a differing experience? Let me know below!