Vegas Bound- Here's how I'm doing it on the cheap.

on July 16, 2018
Let me start of with a big, fat I've never been to Las Vegas. Gasp! I didn't really know where to start looking for deals since Vegas doesn't seem to have any downtime so I took to the interwebs.

Well, my usual sites and apps are fine for flights, but my Hotels.com account really let me down. I had to get more creative than usual just to be able to find any deals at all and make my money last. Sometimes saving $10 on a hotel price just isn't great when the hotel is over $150 a night. But, as you well know, the Vegas Strip is a tourist zone so nothing is cheap.

My first thought was to get an idea of the Strip and what I wanted to do. Like the Taco Bell Flagship store. My list essentially stopped there. 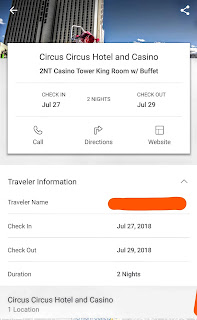 I know that we wanted a nice hotel for Las Vegas. I love being able to stay with friends (and for free) but it's nice sometimes to splurge and just do something fun as a couple. Hotels.com was kind of letting me down, as I mentioned. I knew LV would be pricey but  man alive! One night in one hotel there cost more than my RT trip to Dublin last month! I decided to look elsewhere. Thankfully I have Ebates, because I booked our hotel, Circus Circus (with free live trapeze shows inside, its own casino *duh*, an indoor theme park and pool) with a 60% off voucher from Groupon and earned $40 cash back on my vouchers from Ebates. I love them both and for some reason always forget that Groupon is an option when looking into new cities. So, don't be fooled- Groupon rocks and Ebates is amazing; together they make traveling, nights out and even just idea hopping THAT MUCH better! I booked a $300 room for $166 each night PLUS two vouchers each night for the buffet. (I've heard they're not the BEST but it's free food including breakfast) 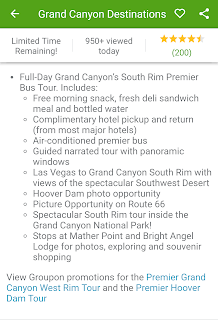 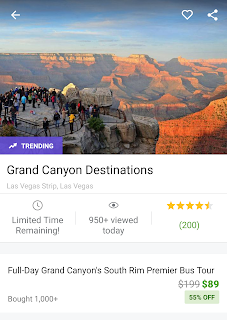 I know Chris has always wanted to see the Grand Canyon, and aside from packing up to visit Arizona for some crazy, asthma inducing reason, I looked into the cost of a tour from Vegas. (Digression coming) I play a free Facebook slot machine game called MyVegas Slots that my brother says cashes in for real prizes, so I slotted and cashed in a few points for the roller coaster at out hotel- but also I was saving up points for a coupon for $50 off a bus tour to the Canyon. Guess what, that tour is over $300 for two adult people. So- nope. (Still rolling in points!) So again I took to Groupon and found a deal for $78 each that includes lunch! Done! Totally worth the leg work to make one of his dreams come true.

We're mostly flying by the seats of our collective pants for Friday in Vegas. I know I'd like to visit the piece of Blarney Stone I heard was there and there's some cool are in one of the men's rooms worth sneaking in for.Chris straight up refuses to see the Backstreet Boys with me, so we will need something else to accomplish. If anyone has any tips, let me know in the comments!

Note: I'm not sponsored by these two companies (or any companies, I should add), I just really like them because they save me a lot of money. If you don't already use one or both of these, I highly recommend checking them out. You can click the Ebates link above but Groupon has a different landing page for every area. Pro Tip: super great when looking for gift giving ideas, too.