What Being A Detroiter Means During the Pandemic Era

on August 17, 2020
I've been quiet for a good while. And while I do miss the snark of writing here, I've taken a back seat from most things to let others speak for me on issues more important than travel, food or apps. 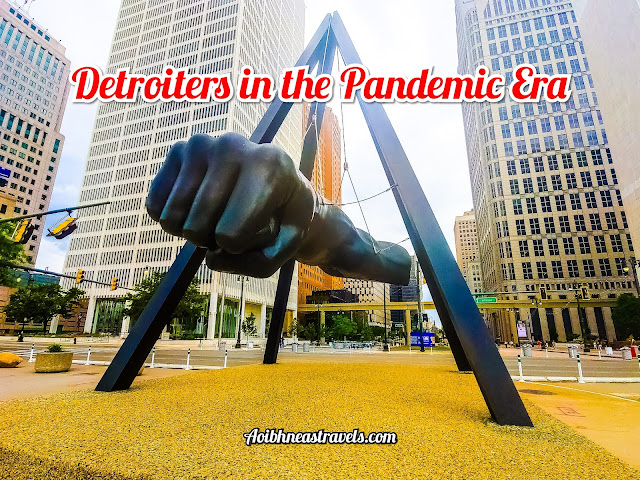 Quarantine has taught us all a little bit about ourselves. I learned that a lot of things are luxury- like reading and writing for fun. I've been asked countless times how many books I've read during lockdown like I should have my nose in a book every waking second when honestly, I've actually read less. Reading to me is a fun escape, a cooling period after work so I can get ready for bed or just keep it chill. Now that I am laid off from work and basically can't go outside without an asthma attack (it's really hot and sticky out lately) I don't need that type of forced chill when all I've been doing is staying in or walking around catching Pokemon by myself. Stay safe. Your government doesn't care if you die but you should.
To keep it on theme of my blog, I did of course have a few trips planned that already are lost. My sister and I were going to go to New York City in April and I was so excited I could have peed. Honestly, I was halfway to tears planning it all with Shannon and showing her why I love it so. Then in June we booked a one day trip to Myrtle Beach and I was looking forward to it not only because I've never been even close to SC but to visit my friend Frank for the first time in 8 years. Nope. End of June was supposed to be my favorite cousin's Bachelorette party in Nashville. I've been through TN but never stopped for more than an hour so I was really looking forward to taking pics an bonding with Sam and her girls and creating new inside jokes and things that us gals do when we all get together. It got moved to this month but at least Nashville is better off right now than Michigan seems to be. Mostly I'm upset about NYC though.
I completed a few sewing and fashion projects, and still working one one or two. In this political climate I've learned that it's important to feel comfortable in my skin AND in what I wrap it in, so in true punk rock style I have been adorning my garments with messages of rebellion, with styles of punks gone by, with cleverness, nerdiness and passion. I make no secret of my hatred and disgust of the current president and how he thinks he's doing a great job so I've been using bits of outward protest in my fashion choices. It seems silly but it's been really important to me to show my rebellion of the current administration loud and clear to anyone who may need a friend or ally. I am anti-racism, pro-choice, LGBTQAI+ supportive, Feminist, artist friendly, an assault and abuse survivor, a left sided Liberal and a warrior. I don't need some failed businessman to tell me I don't matter day in day out when he can barely even manage to walk, talk or drink water like a person.
I digress, as usual.

Detroit has so far remained peaceful in protest. A few bad nights because of the cops and their bullshit but all together peaceful. The media tries to represent Detroit as some apocalyptic cesspool of violence and decay but really we're a heartfelt city of rebuilding and togetherness. We love artists, collabs, togetherness and community. I think Detroit is smarter than most cities. We let people talk their shit and let them feel good about themselves for saying a prayer for us or whatever and let them go.

If you're not one of us then you'll never fully understand what being a Detroiter means with your heart but I'll try to explain. I borrowed some photos from my pal Anna Van Schaap, who is an incredible artist and taught me why hyenas are the bossest bitches in the animal kingdom, to show what protests mean to a city like Detroit to go alongside. This is our home and we will not stand to have the military come in and hurt us like Portland and beyond. We did that already when it was Police versus Detroit in the summer of 67 when a blind pig group of 82 was caught celebrating the homecoming of two vets from 'Nam. Trying to arrest 82 people seems more difficult than just letting the party slide since it was in honor of local War Veterans who should have been praised, but what do I know? Well, that blind pig raid resulted in a riot that fast forwarded decades worth of fighting and discrimination and racism that Detroit had been suffering from. Residents unleashed on one another and on cops for five solid days of protest, unrest, racial inequality and blind leadership. It was savage. Many were murdered, homeless, left with nothing over what could have been a series of conversations that had gone unheard by the Police and Mayoral administrations for 45 years. Detroit took 40 more years but she was rebuilt since with equality on the forefront (after former Mayors Coleman Young and Kwame destroyed it as economically and racially as they could). It's a blue wave of a city that has been discriminated against for decades but one that does not take your shit. As a whole we stayed as true to the fist as we knew how. (The fist of Joe Louis is an anti-establishment, anti-Jim Crow Law symbol that hangs on Jefferson Ave- more here) Detroit is a kind of place where we all help focus on one another- not like Chicago or Boston or something where you can't even look a person in the eye when walking past- Detroiters will meet your eye with a smile, a hello they actually mean and with that heartbeat that only Detroiters understand. We stand together because it's what we were born to do here. The city learned from mistakes and in rebuilding our streets we figured out how to coexist as actual people, not just bumper stickers and social media. That's a sure dig to others, but hey, I'm not taking your shit, either. We mean what we say here and we live for one another. Innovation. Creativity. Honesty. Scars. Openness. Community. That's being a Detroiter. That's Detroit love.

Nothing is perfect but Detroit has always been the place where if you walk down the street and smile or say hi to someone they actually respond in kind. There's no mad rush to move around. There's an actual beach in the summer at Campus Martius Park with cocktails and free movie screenings and dance parties and markets at Beacon Park for free just to give back to the community. We have Shakespeare in the Park, oversized board games on the sidewalk that anyone can play and the our own rebellion style art gallery and museum that resembles the stylings of off-off Broadway theatre where there are no rules or preconceived notions. We are a community over a just being a city. We are the exceptions to the rules, the real brotherly (and sisterly) love, the rebels. We have a movement that other people started to steal for fashion trends called Detroit Vs Everybody that was a mark of our resilience, of our bond and strength. We invent, invest in one another, and have a pride that rivals actual lions, not the football ones. These are life lessons learned by growing up here, by being a part of it. This is what you take with you anywhere you live.

This is Detroit.
**A note on the photos- I chose to leave the raw screencap images that I've posted here to keep in mind that these are Anna's photos from her IG lives and stories. Anna has been downtown fighting the good fight safely and calmly. She stands with Detroit and Michigan as we are all doing, and has been working with others for a bigger cause to reach out for equality. Anna is a hero to many. Be like Anna.