Story time. It'll be quick, I swear! In 1996 my eldest brother went to Myrtle Beach with the marching band for a...something. I don't know. To be in a parade, maybe? Not important. Anyhow, since they bused there he brought back a Pepsi bottle filled with sand, shells and ocean water for my mom and she LOVED it. So every time to a beach since she asked all three of her kids to bring back a bottle of beach. She had a large collection after some time but gave up on it when a bottle cracked and started leaking old ass sand into her prized curio cabinet! 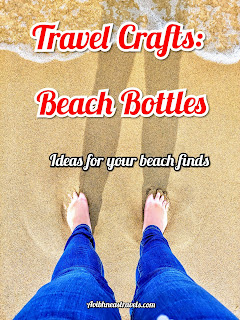 But it stuck with me, as most family traditions do. So lately I have taken myself back to all of my travels, in a matter of speaking, by combing through my memory boxes for my bits of beach, ground and rivalry! *Princeton vs Rutgers University story for another time, perhaps.

Now, I know what you're thinking- maybe. Don't comb a beach unless you have something planned for all the rocks, shells and sand ahead of time, right? Read the room, here, guy. Nobody plans ahead when looting nature! So in an attempt to showcase more and do cool things I've started bottling up my beach bits like a travel blogger/hoarder should and put them on display in the travel memory area of my library for basically me to look at and me alone because nobody comes over. 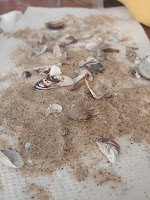 So, what do you do with the pilfered beach you took home, you ask?

After seeing a post on Mauibelle's Insta about how she bottles up bits of beach from her secret beach in Hawai'i (including water) and corks them for display I finally got my act together after 15 or so years since the curio mishap. I started looking online for mini bottles like hers and was amazed at the prices. Ebay had 100 bottles for $19 but it'd tale two months which was a no from me because when I decide to do a thing I NEED to do a thing with haste. Amazon had 6 for $6 which was a maybe. In store I saw plastic ones for sale for roughly the same price that just weren't as solid or as cool looking. I dug around online a little more for a deal because I knew I would be needing at least 10 bottles straight away. 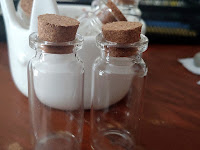 Much to my delight, my local Dollar Tree sells these cute bottles in the craft section. They do come in a few sizes but I opted for the larger ones because I already knew what I was working with. Six for one dollar for glass bottles that are exactly what I'm looking for? Mother may I?

So next I went through all of my assortments and cleaned house a little bit, one at a time to not mix up my areas, and bottled each one. Not hard but it is a little tricky when you find yourself trying to make a loose leaf paper funnel for irreplaceable grains of sand with a cat in the room vying for your attentions (but really she just wants the sand). Then, because I'm Monica Geller, I labeled each one with my labelizer before moving on to the next. 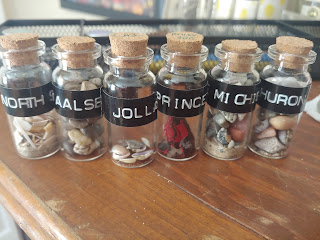 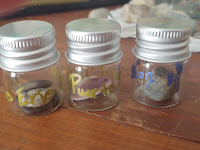 I also grabbed a few shorter and more scientific looking bottles that I liked at the time in theory but when I started working with them, not so much. But the mouth of the bottle is bigger, allowing for larger sized rocks and shells. Also, since they're smaller in size, it makes more sense to put the smaller bottles to use for pockets of ocean goods that are smaller in size like the larger gleaming rock from Kentucky or the small bits of sand and shells from Fijardo's private island in Puerto Rico because as you can see, having three grains of sand and a shell in a bottle the size of a thumb looks silly but I had already corked it (above). Not as cool looking as the corked bottles, I say, but they get the job done.
In the aisle a few days later (because I didn't know how much I would like the corked bottles over the screw tops so I had to buy more) I also grabbed some taller screw topped bottles just in case. They're nothing too special but they do come in handy when you've collected extra shells to send to your best
friend in Amsterdam. 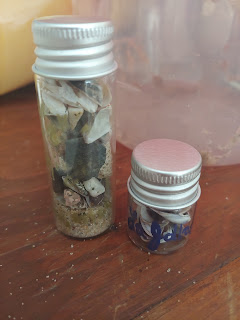 So, all in all, including the marking pens used to write on the glass, which I am happy I purchased from the Dollar Tree, this project cost me a grand total of $5.30 plus whatever label tape costs these days to print out a few inches. But seeing as how I inherited the labelizer from my old job and was free, I'm not really counting it as anything. Win win. It's a really easy project, probably something to do on an afternoon with kids or grandma that can be kept as a cheap but awesome keepsake from any trip that has some sort of ground to it- be it a beach, a street, a graffitied revolutionary war cannon butt, water- you get my drift. Anything goes!
As always, be kind out there and wear a mask if you're able. I'm ready to begin traveling again but because USA still refuses science we aren't allowed. So, everyone, clean yourselves, don't sneeze on anyone and keep your saliva to yourself. 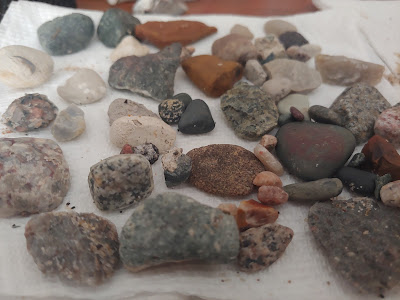