on December 14, 2020
My husband and I just returned from a 6 day trip to Nawlins and I. Am. Exhausted. Yes, we were safe and masked up and distant. Mostly because we hate people. And yes, even though a lot of the fun stuff was shut down like anything with live bands under a roof and King cake making, there were still some really great meals to be had for a vegetarian and a non-seafood eater in the land of crawdads- and some duds. We didn't do a lot of lunch, because honestly, that's the least cool meal unless you're at work and it's your only time away from your crap boss or someone else is buying. So, without much ado, here are a few of our takes on some NOLA breakky bites at different price levels. Because, really, breakfast is the BEST meal of the day. 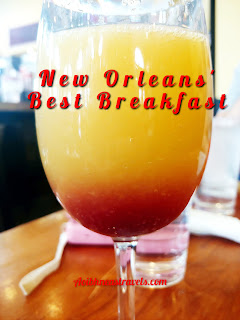 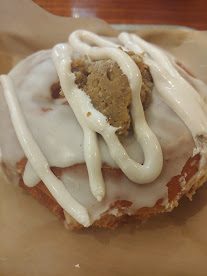 I got two donuts here because I couldn't choose- an oatmeal cookie cream and also a chocolate raspberry which I didn't get to try because I wound up giving it away to a lady on the street who needed help. Chris got a peanut butter banana type that he said was "good" even though he knows that I am allergic to bananas late in life and miss them and am jealous and want every detail. The first donut, the oatmeal, was delicious but really filling for a donut. Chris got a really great cup of coffee and a breakfast sandwich, too, that he says had the best bacon he'd ever had in a restaurant because it was just one thick piece of really good bacon instead of 3 small greasy ones like usual. He said it was a really good sandy and he should have gotten two. Now, I know you don't know Chris but I assure you, if he says something is anything better or higher valued than just an "it was good" that means it deserves a gold star. All together it was a full bellied brunch stop for less than $20 combined. 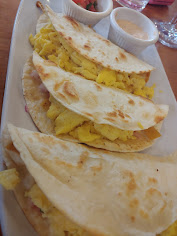 I got a trio of breakfast tacos that honestly could have used some more cheese but were still really good. And filling. For $10 I ate two of three tacos and was full for a good while from scrambled eggs, pico and cheese. Chris got some sort of eggs benny on a house made English muffin and a side candied bacon that I tried to make at home and failed at. My main concern with this place was that they give you adorably fitting plates in the exact size of your food- which means that unless you want to drop bitten bits of taco on to your still fresh tacos you need to lean real close to the table in order to not make a mess of everything. I made a mess, though, because I am who I am. I also got a pomegranate mimosa which was stronger than I had expected at a pretty good price. 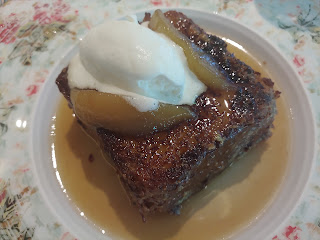 Go here. Maybe even twice. Get the brioche french toast. It's kind of like a french toast log and they call it an appetizer. But get it. I also got a pear mimosa that was delightful!! Two exclamation points, THAT is how delightful it was! The service is impeccable and the rooms are all lovely. Chris said the coffee there was top notch, best cup all trip or more, and has been disappointed with every cup of coffee since. He also said that the steak and eggs were probably the best he's ever eaten (despite my home cook efforts??!) which, as you read above, is a rave! He had many nice things to say about his meal and never once did he say anything was simply "good". So, if you don't think my words are enough to boast, and if you know Chris, which you don't, him having more than three sentences total to say about a meal is a BIG deal. I think if we, for some reason, had to go back to NOLA for, going here for more food would be the silver lining. Maybe for his birthday because the fella beside us (beside us being ten feet away at LEAST) had some sort of cotton candy cake with a candle in it! Anyhow, the brunch was pretty pricey for a cheap ass like me, BUT completely worth it. This place is the genuine deal. 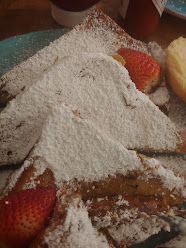 Typical diner fare, good food but nothing to write home about. I had a beignet for the first time here and it tasted like, well, basically nothing. I also had french toast that was 90% powdered sugar and Chris had one of those farm breakfasts that's a bunch of eggs and meat but it was basically the same tastes and price point we can get at home. But, it did fill us up. It's a spot of convenience if you're on the hotel side of Canal street. There aren't a lot of options and there was only one waitress for the entire spot, so expect to wait. We had many opportunities to revisit the cafe in the six days we were there because it was roughly 300 feet away from our hotel and it never even crossed out mind. It reaches shout out status because, despite how busy she got, the waitress was really accommodating and exceptionally thoughtful. 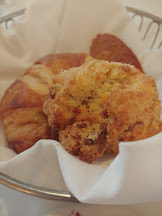 A Don't Even Bother with this Bullshit Award: Broussard's Restaurant and Courtyard

We came here on our last day because we saw previously on the menu that there was a bread basket with the baker's best offerings of the day! Dreamy, right? Also I wanted to try a gin fizz, which I read was supposed to be like cake in a glass but was more like a creamsicle at first until the ingredients all started to separate and it got weird. Well, I mention Broussard's with mixed reviews. Everything I got was awful. Everything except the asparagus. Like most NOLA brunches, there were not a lot of offerings for vegetarians but the asparagus with hollandaise sounded nice and it was amazing. But hella overpriced. It was $7 for this tiny plate of 5.5 stalks. I also, yes, got the bread basket and literally everything in it tasted like it was made the day before and left out on the counter overnight. The "fresh" biscuit crumbled into a dry pile of grain with every bite and neither butter nor jam could add enough moisture. Literally choked it down.  I'm talking gagging cough, tomato face, gasping for air choking. Because the biscuit was so dry that eating it caused me to choke. I also got the marscapone grits. I should not have. They were dry as well, dry as in I stood the spoon up in the center of the dish and it STOOD THERE for a much longer time than necessary for a bowl of grits. It was cartoonish. You can even tell just by the poto that they're not appetizing. There's no moisture visible, no shine, nothing worth trying. But Chris, however, got steak and loved it. The coffee was a disappointment to him. They did have a trio playing jazz tunes in the courtyard and piped the live tunes into the dining room, which was neat but not worth the price of the food. 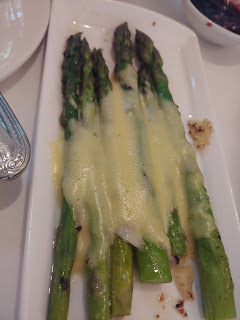 This side was $7. More than $1 per stalk- delicious but not worth the price. Almost, but no. 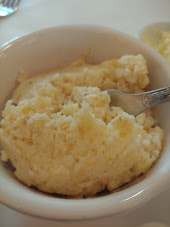 So, that's my takeaway from NOLA's breakfast scene. Just like everywhere- some are good and some aren't. As usual in my thrifty taste, the most expensive was definitely not worth it and I'd never go back there. Funny thing, though, because the google reviews all said Broussard's was amazing so you would think that for weekend brunch they would be gold stars. Literally choked. I don't think I've done that since I was 8. Most of the places that Pinners and Thrillist said are a MUST for New Orleans wound up being the busts of the trip. Like that time I went to Rainbow Bagel in Brooklyn  because it was on all of the MUST DO lists, some of the NOLA spots that were popular to talk about were the ones least likely to talk fondly of after. It's the less spoken of places, the therein hidden gems, that are the spots to see.

Keep your bookmarks open for my NOLA dinner spots. Lunch is not as fun, and sometimes not even necessary. But DINNER- some good options and lesser discussed options to come.

Stay safe out there, kiddies. Wear a mask and if possible, keep your dinners mom and pop style for a while!