For those who don't know, the Leland is and was a historic hotel in Downtown Detroit. Currently the first few floors are hotel, the top most are apartments and the basement is storage and "storage" with an outer sub-basement that's an unattached "goth" club.  The City Club goth dance goers would love for you to believe that it's haunted with the thousand bloody souls of something or other, but, is it?  Maybe!

I can't say if it's a ghostly experience I had here or just my own nerves amped up from Little J and I not B&Eing in to wander around (we were let in by helpful fellas who thought we were staying there), but it's definitely something. We went in thinking we were Nancy Drew investigating gangs and Jimmy Hoffa, but really, we were just hooligans who wound up feeling like the sneakers became the snook! 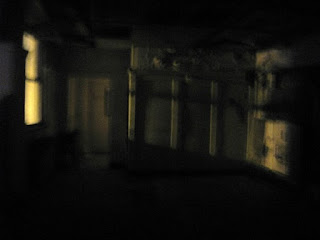 This was with no flash. Wonky lighting. That's a window to the lobby. 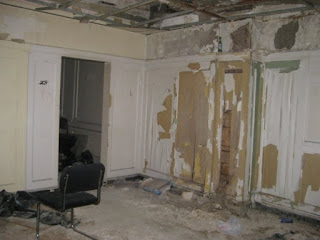 After acting like we belonged there enough to find the elevators (about 20 feet from the door so we had to hang back from the guys who let us in by pretending to tie my shoe and drop my stuff on the ground like a klutz) we walked through the mezzanine. The lighting here was weird; the hallway nearest the elevators had lights, the far side of another hallway down the way had lights, but in the lounge area, no lights! But in that darkness we had spotted, helped only by me holding down my camera flash button, an old broken piano and the whole place is covered with dust. It was a weird feeling here, intriguing but not sinister. Nothing felt sinister, more like we were constantly being watched throughout our journey. Though we didn't break in illegally, we felt like we didn't belong anywhere in this place. Like when you're staying at someone else's home for the night and have to get out of bed in the middle of the night for something but you're too scared of making an unwanted noise. We felt like middle of the night bathroom steppers. Who were being watched and judged. 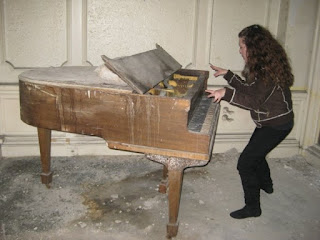 The fourth floor is completely blocked off- the elevator opens there but there's a black iron door padlocked, welded/rusted and blocked shut with mysterious bullet(?) holes. Rumored to be Jimmy Hoffa's favorite hang, the 4th floor used to be a bar. Now it's dead. I tried to get my camera though cracks and holes, alas, nothing really worked. You can peer in slightly and see that it's still set up like a bar area from long ago, which would have been really cool to see, or reopen for business, but, nothing could be committed to camera. Even though we could see clearly with our eyes, the camera had a consistent black view even with a tiny flashlight helping. Creepy. 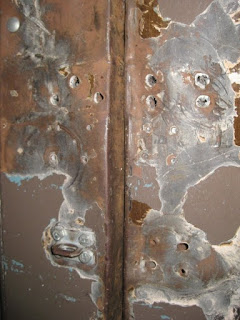 Like classic buildings born in the 20s, there's no 13th floor mentioned. Somehow people thought that by not naming it the 13th floor made it less likely to be unlucky, despite floor 14 still being the 13th floor. Well, this place IS unlucky. J and I heard what sounded like muffled TV all over one floor but only heard actual audibles coming through one door in the very last apartment on the furthermost hallway to the center of the maze. But we no doubt heard the same tv sounds the whole way through the floor, and then it didn't even get louder the closer we got to the actual apartment with sound-which seems scientifically impossible. It was unsettling because for a few minutes it seemed like the tv was only in our heads because it never grew or lessened in volume but we both talked about hearing it and even started creepily putting our ears to every door trying to find the source. 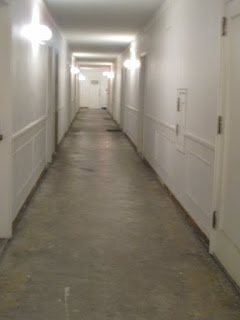 
We also climbed through an open storage area (I say as a question) and onto the first sub-rooftop, which was where the "roof jumpers" must have dove from during and after the Depression, and absolutely, according to historical description and photos, was where the Purple Gang threw people from the roof and made it look like accidents. Interesting! 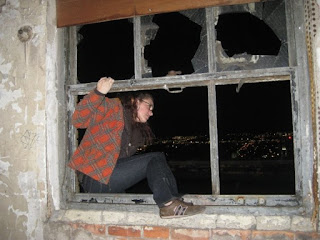 I really miss those shoes
I read once, long before I knew about residual hauntings (playbacks of a past event where it's energy based, not haunts) that people could be seen at night throwing themselves off of the building from here, but I call malarkey on that. Being on this sub-roof was the most like ourselves that we had felt the whole time here. It's like the energy is strictly encased within the walls themselves. 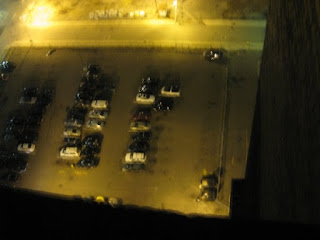 Rumored parking lot of Gang victims
We found our way to some abandoned apartments, which is weird for me, because the Leland has become half-abandoned? Is that even a thing? Some of the apartments on the floors you could hear tv (aside from the tv floor with no other sounds), people talking, babies crying, normal apartment stuff. Then two doors down you have possible death traps and tetanus activators like these below. It's so odd that one door is a door to a home, and the next is a door to a caved in and battered apartment that looks so abruptly vacated that I wondered if cops were involved. But if that were to be the case, would a family with children stay living next door? Or move in after the fact? Look at this mess, it had NO DOOR! Where did the door go? why didn't anyone fix it? Rumor was that it was so paranormal that people just ignore it and go about fixing the stuff people actually live in and just avoid the ghosts (of the paranormal and this sad show of physical apartment of bygone families) all together. 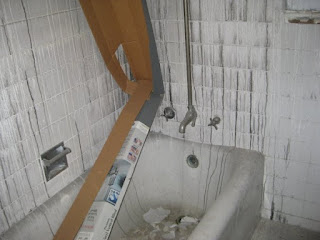 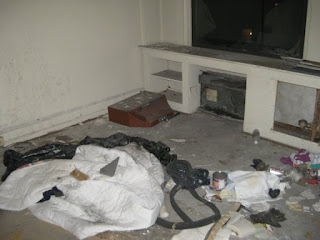 Would you move your family in with this just a three inch wall away?

So, all in all, a great time was had. I can't promise you is it 100% factually haunted, but I can say that it's either incredibly weird and active, or not sound proof at all. In any area. But the number of vicious crimes done here, the urban legends about mobsters, gangsters and murder, these walls would have a lot to say. For a poplar night club in the underground of this hotel and living space, you'd think it would have had better upkeep. The hotel side where guests can see may be nice, but we actually avoided that area and went from Mezz to 3rd floor directly. You know when you're not welcome somewhere because there are no lights. They don't bother lighting the areas because they're unclean, unsafe and completely uninhabitable. It's just so odd to me that half of each floor looks like this, and people still live there, pay to be there, and pay for hotel stays. I'm pretty positive it's haunted, but it could also be based on the foreboding factor and ick of the living spaces. There were certain quarters that felt more emotional than others, like walking into a weird emo fog that we overcame as soon as we walked away, and other times we felt like we were being watched or followed. Mostly watched. I know we weren't supposed to be there and the being watched could have just been Jiminy Cricket, but it honestly felt like it was more than that because usually you can shake THAT feeling after a few minutes of being unnoticed. And it's not like we were actually vandalizing or causing trouble for any of the people so that we would feel like we needed to hide or run from anyone. It lasted a good while, that feeling of being watched, for far longer than guilt would necessarily require for us since we explored a lot. You can almost feel the weight of souls lost at times, I swear, like the pall of a funeral home.

That 4th floor, though.... still so intriguing! 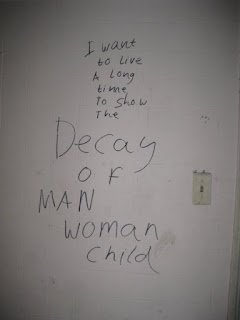 Wonder if they accomplished the goal?
I have enough strange photos of decrepit halls, busted through apartments with missing copper plumbing, oddly vibrant graffiti on indoor hallways to fill a yearbook! It was a full menagerie of weird and creepy. Honestly, imagine being in a white walled, lights busted 8th floor hallway of a part abandoned, part residented hotel/apartment building known for gangsters and thugs and at the very end is a random spray painted doorway that looks like Shake from Aqua Teen. But nobody lives there and the door is locked and it's the only hallway with all of its lights running. WHY? How does that happen? Anyhow, it's probably haunted but I can't say enough about it at this time. Perhaps another investigation should be underway.
Stay safe out there, kiddos.