on April 22, 2021
Typically in the fall season I spend a lot of time downtown at the Masonic Temple Detroit for Theatre Bizarre. I have wandered the halls alone, taken secret doors to new hallways and allowed myself access to 'do not enter' spots because nobody was there to sop me. I've mostly only toured the costuming side of the building, which is the upper levels on the east side of the building. It calls for great rusty window views, breezes from nowhere and great night vision. (This post was created for my other page then moved over to this one and in the transfer it messed up my formatting. I can't seem to move my photos around like I usually do and that's a visual bummer.)

This building is incredible- at 1,037 rooms it's the largest Masonic Temple in the world. It has secret staircases, hidden compartments and room after room of majestic architecture, pass throughs and dead ends.

There is a small ghastly history surrounding the construction of this building, which is still possibly just a rumor, but is just enough to keep your eyes open while wandering around these floors. It's said that architect George D Mason schlumped up to the rooftop one evening and leapt to his death after suffering a few professional blows- financial ruin, wife left him, wanting to corrupt the Freemasons into a more specified cult style and got overthrown- usual stuff! Well, some say he died peacefully in his bed years later, but some swear they've seen him mounting stairs or touring the halls! I have not seen him. I don't personally know anyone who has, that I now of yet. Most people say it's just a rumor and that he died at home in his sleep some years after this tale. However, I do believe this place to be active, if not completely haunted. It's common ghost knowledge that not all ghosts haunt the places they died for "unfinished business" reasons. Some spirits move to their favorite places from their more living days. So, with that thought, it's easy to see how the Temple may have acquired some tenants. From my most frequented spots I have created a short list of noticings: 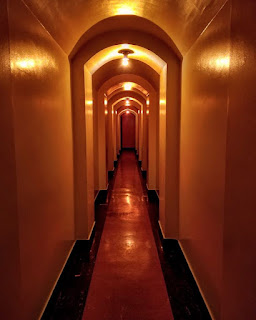 The Theatre Venue- Like any theatre, really, there's a constant feeling of being watched. I've noticed that it doesn't matter if it's a full venue or empty, there's an intense feeling of someone over your shoulder almost no matter where you are. (I've mostly stayed on the Stage Left side of the theatre as a guest and worker) Some have reported seeing a full crowd when they're looking out from the stage after closing. Some feel movement in an empty room. I have felt that, and can understand logically why it happens, but not the tense gut feeling I have when it does. Leave that ghost light on.

The Gated Elevator near the Theatre: This one I have tried to capture many times. It definitely feels that you're sharing that space with someone in one of those slightly awkward ways like when you know Sally from Marketing is right next to you but you don't have anything to say so you both just stare at the elevator doors until one of you can get out... That's the feeling. Slightly awkward but not as bad if you pretend to look through your purse or at your phone for any reason....

The Green Room: I only know it as the green room from Theatre Bizarre, I'm not sure what it is normally. It's on the 3rd floor, Archives floor, just next to the elevator. I've spoken about this room many times and nobody understands me. This room- it smelled! It was the weirdest, most horrid smell I think I have ever happened upon and there was no source. None. It didn't smell like old food, dead animal or even a homeless person. It was a stench that stung nearly all of my senses (I could feel it in my fingers, I swear), that was so bad I couldn't breathe for the small and flavor, so thick was it in the air. BUT it was ONLY in this room, could only faintly be smelled from the hallway and seemingly nobody else really took it in as much as I did. I tried to avoid this space until TB was open and the room was cleared out for actors to move in. It was cleaned up and smelling like dryer sheets after a while, but I still don't understand why I am the only one to have taken this specific room so badly. I don't think I caught anything here, but a visual is good. Maybe someone will recognize it.
The Crystal Ballroom: Some people had mentioned some rumors but I do not think it was anything Serious. Granted I had only been in the ballroom during times of great hubbub, which acts as a hindrance to noticing spooks, but nothing seems out of the ordinary here compared to other spots. I mean, I love spectacle, don't get me wrong, but for something as delicate as ghost sightings can sometimes be, not ideal. But isn't it lovely?

And it could just be me knowing that the Detroit Derby Girls practice and run drills up in the Gym near our costuming rooms but I SWEAR sometimes hen they weren't there I was still hearing a light muffled commotion coming from that ramped hallway area that leads to our end of the gym. Of course the closer you get the less you hear but from just passing through the halls quietly or walking between costuming to the hair and makeup room which was the old wooden tennis courts I could hear what sounded like 20 people talking and cheering and shouting and whatnot from the ground floor like it was piping in from an open window only it was half a floor up from the 3rd/5th floor (depending on which stairs you took) and could only be heard from that area. I can't seem to find the photos I took of the gym, somehow. I'm pretty sure I remember taking a few seconds of video too but even thought it was usually empty and it was ok to be there, I always felt a sense of foreboding when I was a the door like I was doing something wrong or illegal. I wasn't. But I felt like I was intruding.
So, is the Masonic haunted? Yes. Did I see a ghost? No, but I swear I heard them, smelled them and saw a shadow person, which is my most common view of the other world. What I did notice were random scents coming from nowhere, cold spots in places in the building that wouldn't make sense, and the constant feeling of someone watching you. A few TB friends "camp out" in the building for the weeks of the event because they travel for it, or are here 18 hours a day and they have all had lengthy conversations about the goings on when the building falls silent of people. It's not all together unfriendly. A coworker and I were discussing how we both treat the Masonic more like a person than just a building. And that's how we really feel about it, it's a friend, a main character rather than a set.

For more information on the Masonic and their free tours check here.
Keep your mask on and covering your nose, y'all. I want to leave my house in 2021, please!